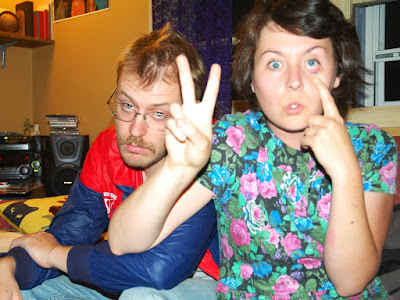 I forget the year. I’ll look it up later. It must’ve been about 2010 or 2011. A year or two or three after we moved to Portland. Late December in the Pacific Northwest. Lindsay had gone down to California for the holidays and I stayed at home with the cat. I worked in the daytime and got high by myself in the evening and watched Harry Potter. On Christmas morning I ate an eighth of  psychedelic mushrooms and a few tabs of acid we had leftover in the fridge. Having never mixed the two before, I was not sure what to expect.

On Boxing Day I woke up to find the house in partial disarray. Honestly, it wasn’t that bad, just messy. I also found that I had written and recorded an album and produced two (very lo-fi) music videos, as well as cooked and consumed an entire roast chicken dinner with several holiday-appropriate side dishes. The album was titled American Soup. I can’t remember why. It’s eight songs long, including a singy-song version of a Leonard Cohen poem and a couple of guitary instrumentals etc. I do not know how I made the guitar noises I made, but I quite like them. Some of it sounds vaguely like I knew what I was doing, which I certainly did not.

American Soup is strange music. I can't really speak to the specifics of the recording process, as I don't remember much about it. There's a lot of odd rhythm, repetition, and guitaring. The first song on the album and one of the music videos (see below), titled "Over and Over Again Pt. 2," (ode to Whitney <3 ), enjoyed a second life after this psychedelic Christmas: in 2015 it became the closing song for live performances of my r'n'b/rap project, COLDGOLDCHAIN. I also re-recorded it as "OVER AND OVER PT 2.2" for an album titled "READY2bWRONG" (listen here). The second song, "Over and Over Again Pt. 1," a noisy rocky thing. It gets progressively weirder from there.

Oh wait, I'll look the year up. It was 2010. And the roast was OK, pretty good apart from the gravy. Not my specialty.

The name of this music project is Childish. Listen to American Soup and watch the music videos below:

And the second music video features Owl the cat: